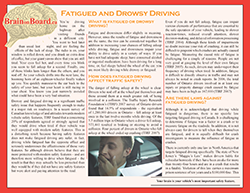 What is the difference between fatigue and drowsiness?

To be fatigued means to be tired of doing a certain task, while to be drowsy means to be lacking in sleep. Although the two terms differ in meaning, the symptoms of fatigue and drowsiness are similar. For this reason, the two can be considered together in the context of road safety.

What is fatigued driving?

Fatigued driving means to be in control of a vehicle while experiencing symptoms of sleepiness. People can experience fatigue for a variety of reasons, including inadequate sleep, the consumption of alcohol/medication, prolonged hours driving, or the time of day.

How does fatigue affect traffic safety?

The dangers of potentially falling asleep at the wheel are clear. Drivers who nod off put themselves and those around them at an increased risk of being involved in a collision. The Traffic Injury Research Foundation’s (TIRF) 2007 survey of Ontario drivers revealed that 14.5% of respondents – the equivalent of 1,280,000 drivers – fell asleep behind the wheel at least once in the past year.

Even if a driver does not completely fall asleep, fatigue can impair various elements of performance that are essential to drive safely, leading to slower reaction times, reduced overall attention, slower decision-making, and delayed information processing (TIRF 2004). To complicate the issue of fatigued driving, people are generally not very good at gauging their own fatigue level (TIRF 2007), so they may not realize how fatigue is affecting their driving. In 2006, the total number of Ontario drivers involved in at least one injury or property damage crash caused by fatigue could be as high as 167,000 (TIRF 2007).

How does fatigue affect safety features?

Many of the crashes that fatigued drivers experience show no evidence of effective braking, and some show no signs of braking at all (Stutts 1999). Fatigue delays reactions to potentially dangerous obstacles so that if/when the driver finally hits the brakes, it may be too late to avoid a crash. In cases where the driver does not brake or brakes far too late, it may not matter whether antilock braking systems (ABS), brake assist, or electronic brake-force distribution (EBFD) engaged at the last minute in an attempt to help stabilize and stop the vehicle. There simply may not be enough time to prevent a crash. In contrast, an alert driver who notices a potential danger and hits the brakes earlier has a much better chance of being able to stop safely and avoid a collision.

Even safety features that do not require the driver to brake and steer in order to activate them can be of less benefit to fatigued drivers. For example, when a collision warning system detects an impending head-on crash, sounds and lights will go off as a warning to the driver. However, fatigued drivers may be less responsive to these alarms and require more time to assess their situation and react. Depending on how much time a driver has before the collision, this fatigue-induced delay could mean the difference between avoiding a crash or not.

The good news is that all the safety benefits of modern vehicle safety features can be accrued as long as drivers continue to remain attentive and alert when behind the wheel.

How many people drive while fatigued?

TIRF’s most recent survey of Canadian drivers revealed that 14.3% of drivers report driving while fatigued in the past year (TIRF 2012). In addition, a 2004 TIRF survey found that 57% of Canadians reported driving while fatigued “at least occasionally” (TIRF 2004). Perhaps even more concerning, 18.5% of Canadians respondents reported “nodding off” at least once while driving in the past year (TIRF 2012). Of the 18.5% that actually fell asleep, 40.3% said they had done so on one occasion, 29.2% reported falling asleep at the wheel on two occasions, and the remaining 30.5% said that had done so three or more times.

Who is most likely to drive while fatigued?

Anyone who has not had adequate sleep or who has been driving for a significant amount of time can be prone to fatigue. Generally, however, fatigued drivers share some common characteristics, including the following:

What are the laws on fatigued driving?

Although it is acknowledged that driving while fatigued is dangerous, there is no specific law targeting fatigued drivers in Canada. There are several reasons for this: first, it is challenging to determine if fatigue was a factor in a crash or to measure fatigue on the roadside. Also, it is not always easy for drivers to tell whether they themselves are fatigued, and it is equally difficult to crash investigators to measure the influence of fatigue in crashes. Despite these difficulties, police can charge fatigued drivers with dangerous driving, criminal negligence, or impaired driving, all of which are federal offences under the Criminal Code of Canada.

Where can I found out more information about fatigued driving?
Related Videos

Difference Between Fatigue and Drowsiness